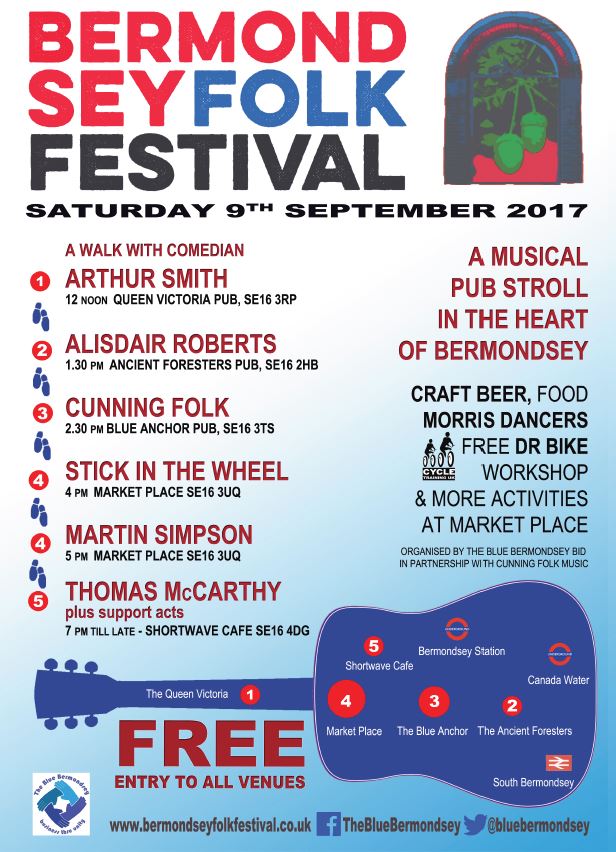 The third installment of the annual Bermondsey Folk Festival takes place on Saturday 9th September 2017 with the mission to celebrate our local pubs and community. The day’s activities begin at The Queen Victoria with a guided walk by celebrated Bermondsey born comedian, author, playwright, TV and radio presenter Arthur Smith to The Ancient Foresters for a performance by Alasdair Roberts who was recently awarded best group in the 2017 Radio 2 Folk awards. Then a short stroll to The Blue Anchor for Cunning Folk, a new British folk and Roots band from South London. Then in The Market Place have a few beers outside The Old Bank to see Stick in the Wheel who’s recent sessions on BBC6 Music and XFM, plus four BBC Folk Award nominations have established them as firm favourites on the UK folk scene and to top it all off is the legendary singer / songwriter Martin Simpson who during a career spanning four decades has been nominated on over 25 occasions in the BBC Radio 2 Folk Awards – more than any other performer – winning on six occasions including Artist of The Year twice.

The final leg of musical meanderings takes a gentle trek to the newly opened Shortwave Café in the Biscuit Factory for an evening headlined by the fabled Thomas McCarthy who has kept the oral musical tradition of the Irish travelling community alive with songs and poems passed down through generations of his family, capably supported by performers from the local scene.